Various fungi cause olive rot, the best known for their incidence are the soapy olive (Colletotrichum), Leprosy (Phlyctema wanderer) and the olive fruit root  (Dalmatian Sphaeropsis). Other fungi that are considered secondary pathogens and even fungi saprophytes penetrate the olives that have been damaged. Spreading fungi reduces fatty performance and get worse the quality of … Read moreOlive rot

To decide between Arbequina vs Picual, it is necessary to be clear about the different uses of each type of oil. There are important differences in the features of the Arbequina and Picual oil. Its cultivation form is also very different, with Arbequina being the most present variety in the super high density olive grove. … Read moreArbequina vs Picual

Selecting the most profitable olive tree variety is not a simple task. To choose the more productive olive varieties, we need to study the land, climate and the diseases of the olive grove that we will face. As we explained in a recent publication about the olive grove climate, certain varieties better resist drought, cold … Read moreMost profitable olive tree variety

It may not be the best extra virgin olive oil in Spain, but the oil of my town is special. A unique and exclusive olive oil In our olive groves, olive tree varieties Manzanilla Cacereña olive, Verdial from Badajoz and have been cultivated for centuries Cornicabra. All of them producing olive oils of excellent quality. … Read moreThe best Extra Virgin olive oil? The olive leprosy is caused by infections of the fungus Phlyctema vagabunda (Previously known as Gloeosporium olivae Foschi, 1955). This pest is of a secondary nature and is usually controlled by fungicidal applications that are made to control the olive peacock spot. There are ​​pests of greater economic impact on which the farmer should focus … Read moreOlive leprosy (Phlyctema vagabunda) Sikitita olive tree, also known as Chiquitita, is a recently obtained varietal production. It is the first variety specifically selected for hedge grove plantations (super high density). The variety is the result of research carried out through the olive breeding program initiated in 1991. The Córdoba University (UCO) and the Andalusian Institute of Research and Agrarian … Read moreSikitita olive tree

The olive tree climate requirements, significantly influences in the productive development of a particular olive variety. Type of exploitation of cultivation: traditional, intensive olive grove, super high density in hedge … The olive grove of intensive surface (7×7, 7×6, 6×5 meters) is suitable in fresh dry areas or with the possibility of irrigation. However, in … Read moreOlive tree climate The olive pyralid moth or Euzophera, has the scientific name (Euzophera pinguis Haworth, 1811). It feeds on the bark and wood of the olive tree, damaging the sap flows and weakening the olive trees. Its presence is not usually worrying thanks to the control by several insects that parasitize it. It is a secondary pest … Read moreEuzophera pinguis 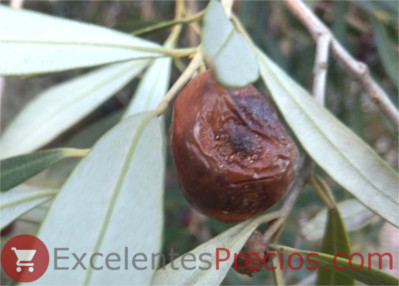 It is a secondary level pest in the olive grove, the violet scale (Parlatoria oleae Colvée, 1880) is also known by the common name violet louse. Its presence does not usually present major problems, although in olive groves destined for greening, the application of control treatments may be necessary. His attacks are less frequent than … Read moreParlatoria oleae – Olive violet scale The sooty mould is one of the diseases or pests that can suffer the olive tree. In Spain this disease is also commonly known as tizne or fumagina. The sooty mould is the cause of the performance of several fungi, among which the genera Capnodium spp and Limacinula spp. Together with these, the saprophytes Aureobasidium … Read moreSooty Mould in olive tree Coleoptera of the family Scarabaeidae scientifically known as Ceramida spp (Melolontha papposa Illiger, 1803). Commonly called white grub of olive tree, its larva is very large and feeds on the roots of the olive tree. Stages of development Egg: it is colored white and has a size of 1.5×1.8 mm being shaped almost spherical . … Read moreCeramida (Melolontha papposa)

The ​​plague called olive tree borer, it is formed by two species of insects polyphagous beetles of the Curculionidae family. Hylesinus Oleiperda (Fabricius, 1792), commonly called black borer and Phloeotribus Scarabaeoides (Bern, 1788). The name “Borer“, receives it by the form of the perforations that it realizes in the wood, similar to a hole. Damages … Read moreOlive tree borer Pizz’e Carroga Olive Tree is the original variety of Sardinia. The main location of the olive grove is located south of Sardinia (Villacidrese, Parteolla and Marmilla) and to a lesser extent in Sarcidano and Ogliastra. The characteristics of the variety support a mixed use, both for oil and for table. There are numerous olive varieties, such … Read morePizz’e Carroga Olive Tree Cellina di Nardò olive tree, is an Italian variety present in the region of Apulia. Currently, this olive variety is in expansion due to its high rusticity and good productive characteristics. In the province of Lecce alone, the olive grove area is about 60,000 hectares (70%), in Taranto about 15,000 are calculated and in Brindisi … Read moreCellina di Nardò Picholine Languedoc olive tree is the most cultivated French variety. Its origin is situated in Gard. Initially the use of Picholine was practically exclusively for dressing. However, the rusticity of the plant and the good quality of the oil have helped the variety to expand throughout all the French olive-growing areas (Ardèche, Valchiusa, Corsica, Aude, … Read morePicholine Languedoc olive tree Cucco olive tree is a Italian olive variety of good characteristics for dressing and olive oil production. The usual area in which the olive grove Cucco is located, is within the Abruzzo region, mainly, the provinces of Chieti and Pescara. The Cucco variety is also widespread in the Molise region, although to a lesser extent. … Read moreCucco olive tree